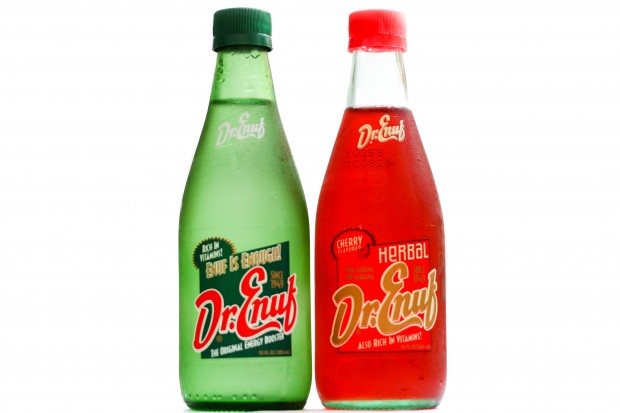 Travel through East Tennessee and you’ll notice a remarkable (and tasty) difference. At restaurants, in vending machines, at Walmart—wherever soft drinks are sold—you’ll find, in addition to the usual soft drink brands found nationwide, a green-tinted interloper: Dr. Enuf.

The year was 1949 and Chicago chemist William Schwartz had heard enough about the lack of vitamins in everyday foods. He soon developed a carbonated drink loaded with B-vitamins and lemon-lime flavor. Schwartz cast about for a distributor and soon teamed up with Tri-City Beverage Corporation of Johnson City, Tennessee. The original bottler of Mountain Dew until selling the brand to PepsiCo in 1964, Tri-City Beverage is one of America’s few remaining independent bottling companies still operating.

Dr. Enuf entered the scene with a full-page advertisement in the Johnson City Press Chronicle, offering a free “sufficient supply” to 400 readers. Initially recommended as a cure for aches, pains, indigestion, constipation, exhaustion and even hangovers, Dr. Enuf has since adopted a “no claims—simply the facts” advertising policy. And the facts are Dr. Enuf is brimming with vitamins. Each 12-ounce bottle contains 220% your daily requirement of thiamine, 80% niacin and 80% iodine. Whether or not it’s a miracle cure, Dr. Enuf packs a vitamin-powered punch.

And unlike almost every soft drink in the country, Dr. Enuf is made with real cane sugar, not corn syrup. There’s the classic lemon-lime style and Herbal Dr. Enuf, flavored with ginseng and guarana, and a diet version of both of them that substitutes the sugar for Sucralose.

Once you leave the Eastern half of Tennessee Dr. Enuf can be difficult to find. While some restaurants in Western Tennessee carry the brand, few places outside the state keep it in stock. If you find yourself craving a bottle when beyond Dr. Enuf country, there’s two options: order it directly from the manufacturer or stop by a Cracker Barrel Old Country Store, the one place that sells it nationwide.

Mark Keller is a student of English and Theatre at Hillsdale College. His articles on subjects as diverse as Linux software and hammock construction are published widely online.

Places to See in Tennessee